Amid a debate under the Gold Dome to raise the fines for people caught texting and driving, one Georgia lawmaker was noticeably absent.

ATLANTA - The Georgia legislature is debating whether to stiffen  penalties for distracted driving. But, during a hearing before the House Public Safety and Homeland Security Committee, one committee member was a no-show.

Though south Georgia Republican Representative Bill Werkheiser missed the debate, he was front and center earlier in a similar debate on a North Georgia highway.

Greg, who didn't want his last name used, was driving down Highway 515 in the rain last December when he says a car turned off a side road onto the highway and cut him off.

“I braked hard, moved into the left lane, when I did it hydroplaned, hit the center median there then came back in the road,” said Greg.

His wife was sitting in the passenger seat and they waited for the other car to pull up beside them. He says when they looked over they saw the driver texting and driving. And his wife pulled out a cell phone camera to take pictures and video to prove it.

They drove along for two to three miles, shooting video first, then later photos. Photos he says that show the driver was still texting.

Greg and his wife noticed something else. The tag showed the car belonged to a Georgia State Representative.

“This man should be following the laws, because he writes the law,” says Greg.

Distracted driving has been a hot topic across the country. In 2018, state Representative John Carson introduced a bill making it illegal to hold a cellphone while driving or manually send or retrieve text messages. Supporters say the law is already having an impact, pointing to a drop in highway deaths.

“We’re actually down 7%. I think we are doing fantastic,” said Representative Carson during the committee meeting.

Back on Highway 515, Greg says  he caught up with the driver at a stoplight, rolled down his window, and confronted the man, accusing him of almost causing a dangerous accident.

“He looked right at me, and said, I'm not texting and driving. And he rolled his eyes and drove off,” Greg said.

We caught up with Rep. Workheiser at the capital. He told us he didn’t text and drive.

“No, I generally have my phone up for directions. Not for texting. Sounds pretty embellished, I haven't seen it,” said Rep. Workheiser. 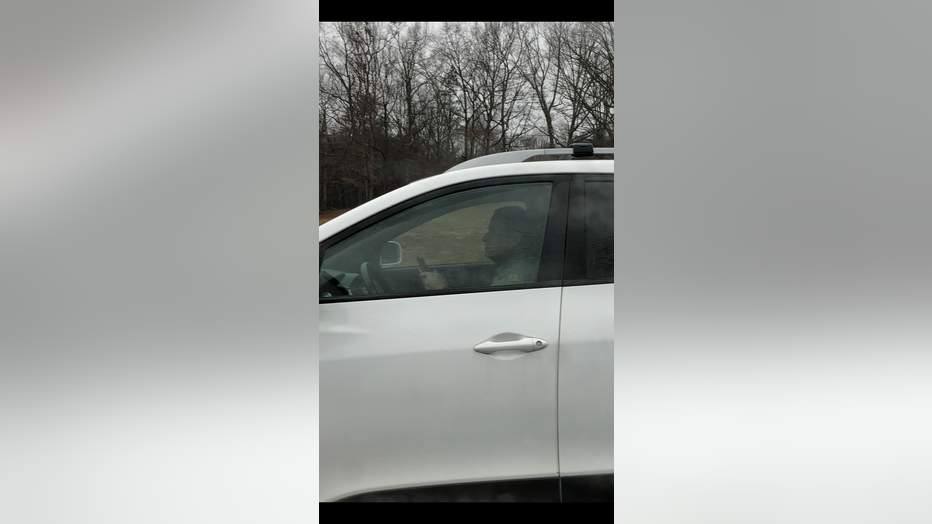 So, we showed him the pictures.

“Looks like we are stopped. Again, you are not allowed to do that,” said Workheiser. With that he walked off.

Could Rep. Workheiser have been stopped when the picture was taken? In one of the pictures you can clearly see two road signs in the background.

Those two road signs can be seen  right in the middel of Highway 515. There is no stop sign or red light anywhere near that spot.

HB 113 would be the first update to the 2018 Hands-Free Georgia Act, which prohibited drivers from handling phones while driving.   Under the law, motorists can use hands-free technology. But supporting a device with any part of their body is illegal.

Rep, Carson hopes strengthening the fines will ultimately save lives.

“It doesn't become real until they have a crash or a loved one has a crash,” said Carson