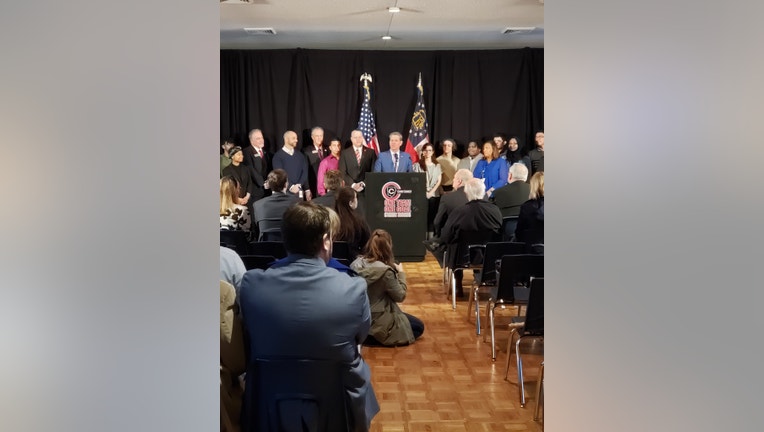 Gov. Brian Kemp speaks to students and educators during a visit to McEachern High School in Cobb County on February 13.

POWDER SPRINGS, Ga. - Governor Brian Kemp is not backing down from his push to increase teacher pay across the state, despite the fact that some have questioned its high price tag amidst a year of budget cuts.

"I believe this teacher pay raise will go a long way to incentivizing our best and brightest to stay in the classroom," Gov. Kemp said in a speech to students and educators at McEachern High School in Cobb County Thursday morning.

Kemp's budget includes a $2,000 pay bump for teachers next school year, which represents the second and final installment of the $5,000 raise he promised during his gubernatorial campaign in 2018.

The Governor's Office estimates the raise would cost the state $360 million next year.

"I think the teacher pay raise is still something that we're taking a look at in the House.  That's a big ticket, frankly," House Speaker David Ralston, R-Blue Ridge, said last week.

Meanwhile, state agencies have had to cut back after Gov. Kemp requested budget reductions of four percent this year and six percent in FY 2021.

"Everybody's got their different priorities," explained Kemp.  "That's what the session's about.  We look forward to working on those, but to me, you know, the teacher pay raise, reducing testing so we allow these great teachers you saw today to do exactly what they were doing in the classroom--that's teaching these kids and getting them excited about things.  That is our future.  That's my number one priority."

The legislative session will resume on Tuesday, February 18 at the State Capitol.